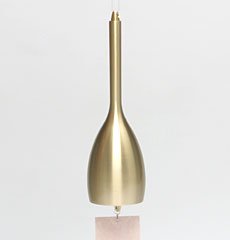 A quality metal chimes a good sound. The sounds of the tin wind chimes made by Nousaku are lyric but calm.

As you see the silhouettes, it has various shapes. The difference of the shapes makes the different sounds.

Furthermore, the Nousaku wind chimes are suitable for the decoration under the eaves or at the windows, because they have sophisticated or humorous appearances.

Since each product is made by the craftsmen manually, you can enjoy the Japanese traditional techniques with the sounds and appearances.

After that, also the tableware they have produced became to be loved around the world.