Did Hiroshige really draw the landscape of Kambara?

Kambara, the snow in the night from “Fifty-three stages on the Tokaido” series

Among numberless other landscape ukiyo-e printings, the artworks of Utagawa Hiroshige (1797-1858) receive the highest evaluation inside and outside the country.

All prints of ​“Fifty-three stages on the Tokaido”​

Hiroshige drew most of the print with just white and black. Just three people whose heads and shoulders are covered with snow have other colors. And it is so quiet and the sound in the picture is their footsteps on the snow.

Hiroshige joined the shogun’s procession and actually walked on Tokaido from Edo to Kyoto in 1832.

He saw and sketched how the stages at that time. He made “Fifty-three Stages on the Tokaido” based on it.Kambara is the 15th stage on Tokaido. It places on Shimizu-ku, Shizuoka-shi, Shizuoka Prefecture.

But the famous picture has a mystery. That is whether he really drew the scene of the stage he saw with his eyes.

First, as satsuma is the well-known product around the area, Shimizu City is a warm place. Furthermore, Shizuoka Prefecture is the prefecture with third less snowing days following Okinawa and Miyazaki in Japan. The area has deep snow just like the artwork once a decades

Second, he stayed on the stage in September. The average temperature of Shimizu City in that time is 20-25℃. It must not snow.

And last, we couldn’t find the landscape of the print around the area.

For these reasons, some people believe that Hiroshige drew the picture based not on the actual scene but on a winter landscape by Katsushika Hokusai (1760-1849).

Otherwise, I think, he created the imaginary scene of the place based on what he saw. He has outstanding abilities of composition and coloring. In the prints of “Fifty-three Stages on the Tokaido”, there are various seasons, weather, and time zones.

The mystery has not been unclarified.

In Shimizu City, there are Shizuoka City Tokaido Hiroshige Museum of Art. It is the first museum which has the name of Hiroshige. You can enjoy his artworks including Kambara, the snow in the night at the museum. 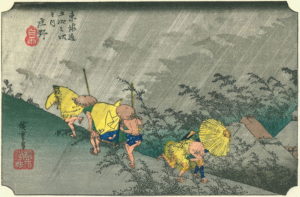 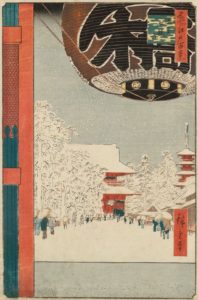 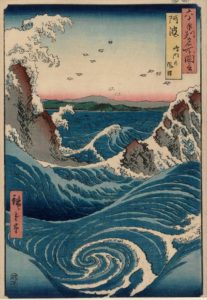 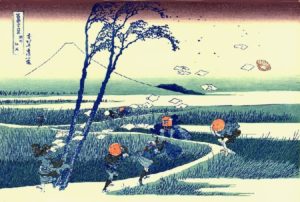 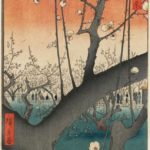 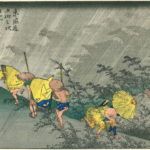