"The Wind God and the Thunder God" by Ogata Kōrin

Ogata Kōrin (1658-1716) faithfully reproduced the original drawings of Tawaraya Sōtatsu (1570? -1643?). It is thought that Sōtatsu’s “Wind God and Thunder God (Fujin and Raijin)” was in Myoko-ji Temple, a branch temple of Kennin-ji Temple, and Kōrin met this masterpiece there. The researchers speculate that he met the work around 1710. In the Ogata family, there remain many works and materials by Sōtatsu in relation to Hon’ami Kōetsu (1558-1637). Sōtatsu died before Kōrin’s birth, but he learned a lot from his teacher who he had never met as a painter, based on the works that remained. Later, Sakai Hōitsu (1761-1828) and Suzuki Kiitsu (1796-1858) created similar works, which symbolized the painting style of the Rimpa school.

The images of Fujin (the Wind God) and Raijin (the Thunder God) are arranged so that the whole image can be seen on the screen, not just at the edge of the screen. In Sōtatsu’s painting, the eyes of both gods are facing downward, while in Kōrin’s they are looking at each other.
The faces of the two gods seemed a little softer, and they became more vulgar personified than his master’s.

Title: The Wind God and the Thunder God 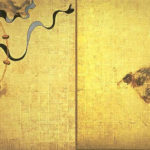