“Morning Glories”, in which the flowers are expressed only by dark blue and green on a gold background, is  influenced by the work of Ogata Kōrin (1658-1716), “Irises” screen painting. However, unlike Kōrin’s painting based on the Japanese literary works, Suzuki Kiitsu (1796–1858) drew a more sophisticated plant picture.

He seems to have focused his painting skills only on figurative beauty. Korin’s iris flowers are in a vertical shape, while the morning glories of Kiitsu are curvy and wind like a dragon.

The God of Wind and Thunder by Suzuki Kiitsu

“Mountain Stream of Summer and Autumn” by Suzuki Kiitsu 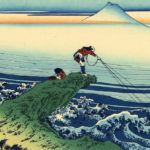 The God of Wind and Thunder by Suzuki Kiitsu