Maruyama Ōkyo (1733-1795) was a painter who worked in the middle of the Edo Period (1603-1868) and established the Maruyama school. Before the appearance of Ōkyo, both the Sanshui painting and the flower and bird painting were to draw in accordance with the model.

However, he drew the subject with throughgoing observation. The sketch of him was very easy to understand and was widely supported by many people from the noble to the townspeople.

This picture, which is designated as a national treasure, is believed that Ōkyo produced by the request of the Mitsui Family that had been developing the business of kimono merchant and money changer in large cities such as Kyoto.

The pine trees depicted as a motif is an evergreens tree and it is said to be an auspicious tree symbolizing long life and good luck. Also, snow is a symbol of freshness. The backdrop of gold mud is producing a shiny and heavenly winter morning. The gold shows the dazzling shine reflected from snow. There is no outline anywhere on the trunk or branches of the pine trees. In order to express it graphically, he dared drew trees without daringly using contour lines.

Even more surprisingly, snow is not drawn. He used the white of paper of background as it was. While it is still, the texture of the snow comes across the viewers and they can imagine the scene that it will melt slowly in the daytime. 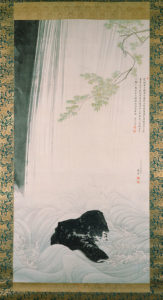 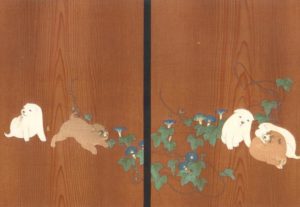