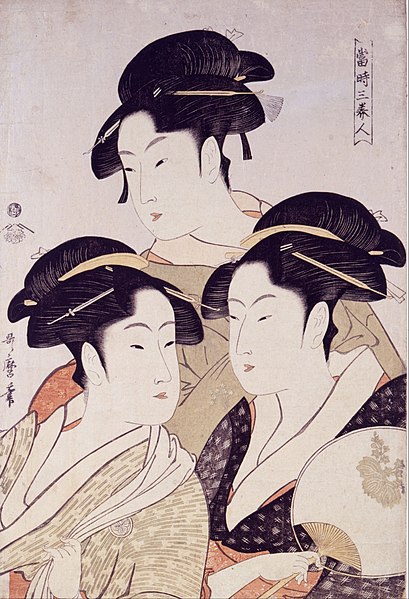 In the world of ukiyo-e, Kitagawa Utamaro (1753-1806) had no equal with beautiful woman portrait (bijinga). Especially, “Three beauties of the present day” is one of the most important works.

“The present day” means Kansei Period (1789～1801) of Edo Era when Utamaro was active. It is common to call the print as “Three beauties of Kansei” in Japan.

The popular bijinga is thought to be created in 1793. The three girls were so famous for their beauty around Edo city, from left to right, Ohisa, Toyohina, and Okita.

They look alike? Exactly. You may consider that you cannot distinguish because you are not Japanese. No. Actually, it is not easy to distinguish at a glance for the today’s Japanese people. We also think they really look the same.

I’ll introduce the girls with seeing their faces and kimono clothing.

The history of Japanese traditional clothing

First, the girl on the left is Ohisa. She was the drawing card of the teahouse Takashima at Yonezawa-cho, Ryogoku. Most of the drawing card girls at that time including Ohisa didn’t wait on customers and just stood at stores

The owner of the teahouse was her father Takashima-ya Chobei whose regular business was a senbei (rice cracker) shop. A few months before the publishing of “Three beauties of the present day”, Utamara had drawn the 17 years girl and she became the popular people in Edo city.

Compared with Toyohina and Okita, she wears the light and calm color clothing. And she closes her mouth and looks far off into the distance. She would have been the mild-mannered girl.

The girl in center Toyohina was already famous. She was the geisha in Yoshiwara. And not just a geisha, she was the master of Tomimoto-bushi (a school of shamisen) and a personal entertainer of the wealthy merchant Tamamura-ya.

Toyohina on the print wears the thick and high-quality kimono and seems to have room in her mind.

Last Okita was the drawing card of Naniwa-ya. She was a daughter of the teahouse Naniwa-ya within the precincts of Sensoji temple. Unlike other girls, she showed her appearance of bringing the green tea.

She was so charming and did good service. In no time, lots of people came to Naniwa-ya and Sensoji temple to see her. Occasionally, the crowd disturbed their business and she sprinkled to drive them away.

Her almond-shaped eyes would show that she was active and defiant. 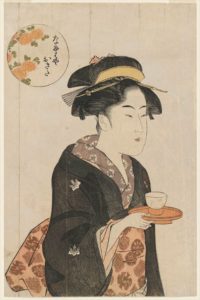 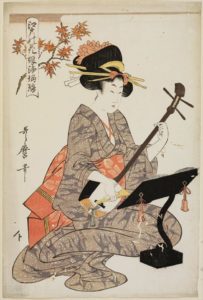