The biography and woodblock prints of Utagawa Kunisada (1786-1865)

Utagawa Kunisada (歌川国貞) was the one of the most popular ukiyo-e artists at the end of the Tokugawa period as well as Utagawa Kuniyoshi (歌川国芳), among the disciples of the first Toyokuni (豊国). In contrast to his younger disciple, he was a serious person and always neatly dressed.

Maximum number of works in all of the ukiyo-e artists

He was born as a son of a timber wholesaler who run a ferry. But he already began to study painting under Toyokuni in the mid-teens. And he published the first Nishiki-e at the age of 19.

His talent bloomed at his young age. He sent Yakusha-e (kabuki actors portrait) and bijin-e (beautiful women portrait) one after another to the world.

In 1812 he started drawing the picture yakusha-e’s Ookubi-e(the picture of the upper half of the body) series, “Kabuki Actor Puzzle” (役者はんじもの, Yakusha hanjimono)  and “BigHit Kyogen” (大当狂言之内, Ooatari kyougen no uchi). He used mica powder for coloring the background.

Kunisada declared himself the second Toyokuni in 1844, but in fact Toyoshige had already inherited the name. But he even so didn’t admit it and continued to insist that he was the second for his signature. Unfortunately for him, the researchers recognize him as the third Toyokuni.

As a Ukiyoe painter who painted more pictures than anyone, he gradually loses the quality of his work in his later years, but he led the world of ukiyo-e with Hiroshige (広重) and Kuniyoshi as one of Utagawa School.

To the top of the page
[/su_animate]
Sponsored Links 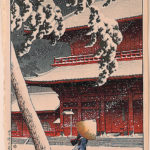